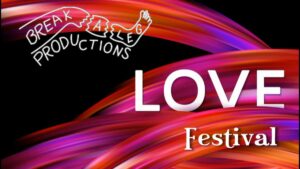 This February we bring back a favorited video series celebrating Valentine’s Day!

Each week we will release one filmed play creatively shot that explores the most universal and mystical human experience: LOVE.

Timeless love blooms until they find out each other’s ages and a Pandora’s Box is opened.

“Bravo. Bravo. Bravo. What  a GREAT job the directors and actors did. Taking their time to realize every moment and not rushing for the laugh line was superb.”  – Alan Magill, Playwright, Age Old Question

POTION OF LOVE by Jodi Antenor

Raychelle has had a lot of trouble in her dating life and she seeks out a Tarot Reader to find a shortcut to her problem. But it turns out, the Tarot Reader’s life depends on Raychelle’s decision to drink the potion. In fact, she’ll do whatever it takes to make that happen!

“Love Potion was riveting with an ending I did not see coming!”
-Alan Magill, Playwright

Tony is a Keto-fixated, does burpees all day, sickeningly fit guy. Kay has developed a pandemic relationship with cheesy popcorn. Maybe love?

Marj, who is caring for her aging husband, Art, a once famous artist who is now suffering from early-onset dementia. When Marj realizes that Art is painting for the first time in years, she allows herself a rare moment of joy. Art’s final reveal shows how true love triumphs, even in the bleakest of situations.

Jodi Antenor (she/her) is an emerging playwright living in Florida. She currently writes poems and plays that are influenced by her life. Her topics include: life as a black woman, relationships with loved ones, and even a little bit of tarot reading! Poetry is her passion, but she loves to write plays as well. She is also a founding member of Whiskey Theater Factory, a theater collective for emerging and untapped voices. They focus on bringing voices of color, women, and the LGBT communities to the spotlight! www.whiskeytheatrefactory.com Instagram: @jodi.antenor TikTock: @sargejojo

Rachael Carnes received a 2020 Oregon Literary Fellowship, a 2020 Oregon Arts Commission Career Opportunity Grant, a 2021 Lighthouse Writers Workshop Advanced Dramatic Writing Fellowship, is the recipient of the 2021 Jane Stevens Award for Theatre and has had productions of her work across the U.S., U.K., the Middle East, Canada and Asia, with invitations to develop work at the Inge Theatre Festival, the Kennedy Center for the Performing Arts Playwriting Intensive, the Midwestern Dramatists Center Conference, the Mid-America Theater Conference, the American Association for Theatre in Higher Education New Play Development Series, the Sewanee Writers’ Conference, the Lighthouse Writer’s Workshop, the Great Plains Theatre Conference and the Samuel French Off-Off Broadway Festival. Rachael is the new play development coordinator for KDC Theatre, London, a representative for the Dramatist Guild, and founder of #CodeRedPlaywrights, an artistic collective dedicated to writing plays in response to gun violence. Her work is seen in many literary journals, and was nominated for a 2020 Pushcart Prize. Rachael and her family live in Oregon. www.rachaelcarnes.com

Cathrine Goldstein is a many-time bestselling novelist & award-winning playwright. Most recently, her play, “What Good Did We See Today?” a winner of the 2nd Act Players Spring Festival, was nominated for Best Streaming Play 2021 by Broadway World Chicago. Cathrine’s poetry, short stories, and blog posts have been widely published. Her work has been featured on CNN, HLN; AOL; Jane Radio, and many additional television and radio shows. She is also a prolific ghostwriter. Cathrine holds a Master’s Degree in Theatre History, and is a member of Dramatists Guild. www.CathrineGoldstein.com  Instagram:@authorcathrinegoldstein Facebook:@AuthorCathrineGoldstein Twitter:@cathrinegold

Alan Magill is a playwright who considers himself most fortunate to work with good creative talent, including BAL for a previous reading.  He has had numerous productions and readings and is very happy that he does Zoom readings of his plays from Ateret Avot Senior Home where he is Director of Activities. The plays go out to two Holocaust survivor groups.