What They’re Saying About Break A Leg 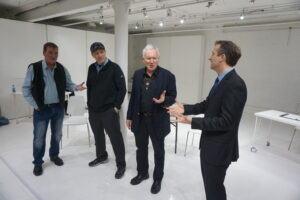 THIS SENSELESS KILLING by John Wolfson

“How can I ever thank you?  The reading on Saturday was one of the finest performances of a play of mine ever, and certainly the best audience response!  The cast was brilliant and so was the direction.  I am so grateful to you for doing it. Please let me know if there is anything I can do for you. I would love to work with you again.” — John Wolfson 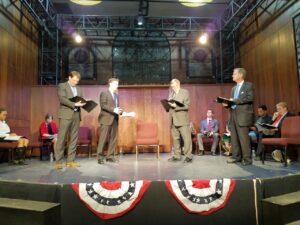 THE BEST MAN by Gore Vidal

“The reading was a gem–your director and cast pulled off a sterling performance despite cramped scheduling and limited resources. Vidal’s dialogue really came alive. And despite the fact that earlier revivals over the past 20 years have not fared well, the timeliness of this reading was stunning. We think the time is ripe to re-stage.” — Sharon & Irving Lerch

THE SHERLOCK ENTREATY By Charmaine Spencer

Tuesday, September 24, 2019 at the Playroom Theater 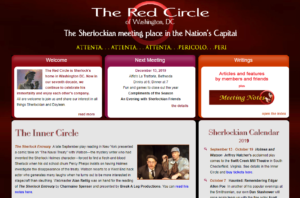 “Again and again we realize how prescient Mycroft Holmes was when he observed that he hears of his brother Sherlock everywhere. Today’s deluge of new takes on the iconic detective are surely without precedent, and offer endless opportunities for innovation and fun—a feast for modern Sherlockians. Case in point: a delightful staged reading of Charmaine Spenser’s The Sherlock Entreaty by New York’s non-profit Break A Leg Productions. Sherlockians and friends gathered on September 24 at the cozy Playroom Theater just steps from Times Square for an early look at this comedy, based loosely on “The Naval Treaty.” The comic twist is that…..” READ THE FULL ARTICLE HERE.

LIGHT UP THE SKY By Moss Hart

“Just returned from two hours of great theater filled with fraught & fun moments of laugh out loud or cringe with delight. A terrific cast who made believable characters shine throughout an extraordinary production.”  –  Toni Elizabeth Kurasch, BAL fan, commenting on Facebook.

“You made it come to life for me.”- Carol Pessin, BAL fan, commenting on Facebook.

THE RELATIVITY OF LOVE: ALBERT EINSTEIN AND MILEVA MARIć

Of the January 23, 2018 performance David C. Cassidy writes: “My sincere thanks to everyone for a great job in bringing “Relativity” to life. I am very grateful for your support and encouragement.  Keep up the excellent work.’ –  Best wishes, David

Check Out This Lovely Letter From A Break A Leg Fan! 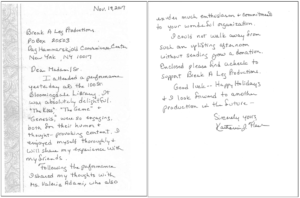 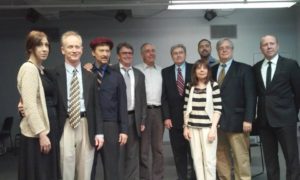 “My thanks to everyone at Break A Leg for all of the hard work. It really paid off. An outstanding show. Everyone I talked to loved it. I’m so glad for Break A Leg.”  – David & Janet Cassidy

“Congrats to all! Great night had…  You pulled off an ambitious and engaging piece of theatre. Story and acting were both quite gripping… Will Spread the word!” — Thomas Campbell Jackson

“I was very impressed by the quality of the Farm Hall performance.  The acting was first rate, as was the play itself.” – Ben Bederson, Professor Emeritus, NYU

DOCTOROW FOUNDATION
BAL has received several grants from the Jarvis & Constance Doctorow Foundation, including $5,000 in 2014.

We are delighted to have been supporting your organization during 2013. The Jarvis and Constance Doctorow Foundation is so pleased to be able to contribute to the good work that you do. Thank you for giving us the opportunity to part of your vision. I am available to answer any questions you may have about the Community Foundation of Utah and this transaction.  Our mission is to harness Utah’s entrepreneurial spirit in service to the common good through smart philanthropy. We are proud to include your organization with ours.”  – Fraser Nelson,  Executive Director Community Foundation of Utah

Many thanks to Teri Black and Break a Leg Productions for including my work in their Benefit Bash.  The staged reading of my one-acts from “Senior Moments” was delightfully pulled off by a marvelous cast of actors.  It was a great pleasure to meet with them all and experience their dedication and enthusiasm for live theater.  Bravo!
– Playwright, Frederick Stropel

“Break A Leg Productions brings enthusiasm and commitment to all of their performances.  Our program merges science and the arts, and BAL has consistently brought us provocative readings that enliven science topics.”
– Adrienne Klein, Co-Director, Science & the Arts, The Graduate Center of the City University of New York

“…I would like to share with you the very real positive impact that your recent play presentation had on our first-year students. As dean with responsibility for the academic and intellectual lives of our students, I found great value in the way that your staged reading of “Copenhagen” enhanced the theme of our 2003 Orientation and certainly inspired our students to think more intellectually. Thank you for helping to make our 2003 First-Year Student Orientation a success and for your part in preparing our students to begin their new academic year ready to engage in debate and to ‘question the answers.”

– Gladstone A. Hutchingson, Ph.D  Lafayette College, Dean of Studies, Professor, Economics and Business
“…my appreciation for all the efforts that your company made in presenting a rehearsed reading of Oxygen at CUNY…It was a pleasure…I hope that our paths may cross in the future…”
– Carl Djerassi co-author of Oxygen

“The Break A Leg production company has been a pleasure to work with.  They are very popular; in fact last weekend the audience was filled to capacity.  They always present programs that are interesting and fun and they are thoroughly professional in every apsect of their work. I am happy to have them back again and again ”
– Barbara Schwartz – Senior Librarian, Columbus Branch, New York Public Library

“They’re very good and I enjoyed working with (Break A Leg). Their reputation is excellent. They’re moving up to another level now, the production arena, which is marvelous. What sets them apart is their focus on comedy…”
– Carol Holland – actress-writer, Manhattan Plaza News

“It was wonderful to have (Break A Leg) perform at our Center. What a treat…The manner of your creation and your mode of operation is in its self an enriching learning experience. And to top that with an expert acting group who are in thought provoking pieces, that stimulate as well as bring forth laughter, could any one ask for more?” 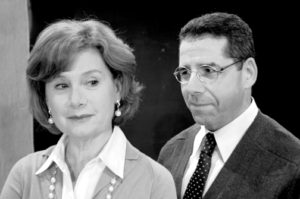 How interesting that Eugene Ionesco wrote The Bald Soprano in 1948, nearly fifty years ago, with its absurd commentary on the isolation in human relationships, and it still rings true. I doubt that there’s a married couple that couldn’t identify with Mr. and Mrs. Smith (Phil Garfinkel and Donna Lee Michaels) as they sit in inane after dinner conversation at the opening of Break a Leg Productions first of Ionesco’s ground breaking plays.

Their Maid (MarthaLopez Gilpin) announces the arrival of Mr. And Mrs. Martin (Teri Black and Jay Aubrey Jones) with authoritative energy, and the couple enters, sit across from each other, and proceed with the highlight scene of the play. Although they seem to note something familiar about each other, they can’t quite connect how they know each other until they realize that they share the same bed, and a child. Talk about marital alienation! And they capture it perfectly.

After a series of doorbell rings, The Fire Chief (Michael Edmund) arrives in search of a fire to extinguish. The two couples are appalled to find out that the Maid and Fire Chief are lovers, as they dance a comic sensuous dance before them.

The conversation continues between the two couples, and, as it escalates in volume and frustration, Ionesco gets his point across: that no one hears or really cares about what anyone else says or thinks.

Director, Joe Benenati kept the costumes and blocking of the play minimalist and contemporary. The show might have been better served by a more realistic take on the text. Nevertheless, The Bald Soprano keeps the audience’s interest and succeeds in the play’s original intention.

The second play, The Lesson , is quite another story as The Pupil (Judy Jerome) arrives at The Professor’s (Michael Gilpin) home to be tutored for an advanced degree in diplomacy. Ushered in by yet another Maid, (Joan Valentina), the play starts out normal enough, at least for Ionesco.

The Maid warns the Professor to take it easy on the new student or there will be yet another serious outcome to their session. The professor grills the pupil on complex math problems that she answers easily, but then when she can’t add or subtract simple arithmetic, he starts to get unhinged. Against the Maids warning, he changes the topic of study to philology, and, The Lesson spins further and further out of control.

Unlike in the first play, Director Christopher Bellis has steered or allowed Ms. Jerome and Mr. Gilpin to play it for real, and these two talented actors give tour de force performances. They connect with each other and the audience as The Lesson goes awry, with comical yet tragic consequences.

In addition to the craziness and repetition, The Bald Soprano and The Lesson examine class distinctions, yet The Maids in both plays are stronger and saner than their employers. For all the absurdity, Ionesco understood human beings in ways that still resonate with truth, and continue to secure his standing as a major playwright of the twentieth century.

MORE QUOTES FROM FANS OF BREAK A LEG:

“Thank you for bringing all those wonderful productions to us!” – Linda Brois

“You do terrific work. Congratulations to all.” –  Gunther Marx

What students had to say about BAL’s Theatre Talk Class at the 14th Street Y:

“..I learned more about the theatre than I knew before I took the course…This is a great course and I hope you return in the fall…The presenters were knowledgable and articulate. The subject matter was varied and involved many personal antidotes.”
* * * *
“…my appreciation for all the efforts that your company made in presenting a rehearsed reading of Oxygen at CUNY…It was a pleasure…I hope that our paths may cross in the future…”
Carl Djerassi co-author of Oxygen
* * * *
“Thank you for arranging such a wonderful performance of Overruled at the Library as part of our Adultery! Series. We have had such good comments on the whole series, and we very much appreciate (Break A Leg’s) time and effort…”
Harold Augenbraum  Mercantile Library Director
* * * *
“They’re very good and I enjoyed working with (Break A Leg). Their reputation is excellent. They’re moving up to another level now, the production arena, which is marvelous. What sets them apart is their focus on comedy…”
Carol Holland – actress-writer  Manhattan Plaza News
* * * *
“In my twenty-three years of teaching, students have never commented at the end of a Shakespearean production that they wanted to see more. Yet, that was the comment students made after seeing Break A Leg’s…reading of Taming of the Shrew…they wanted to see more because the actors did such a fine job…”
Barbara Litt  Lincoln High School  Yonkers, New York
* * * *
“Thank you for the wonderful staged reading of Eugene Ionesco’s ‘The Bald Soprano’…The cast all performed beautifully…my appreciation to all those involved for their fine work.”
Anne Hofmann  Donnell Library Center Chief Librarian
* * * *
“I must say that (Break A Leg) has done it again!!! It was just great having you perform at our Center.”
Rosalind Siegel  East Side International Community Center
* * * *
“It was wonderful to have (Break A Leg) perform at our Center. What a treat…The manner of your creation and your mode of operation is in its self an enriching learning experience. And to top that with an expert acting group who are in thought provoking pieces, that stimulate as well as bring forth laughter, could any one ask for more?”
Rosalind Siegel  East Side International Community Center