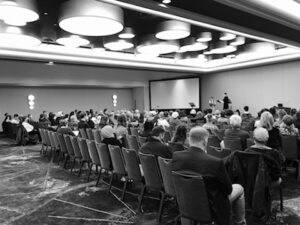 The Half-Life of Marie Curie

Held Sunday April 10, 2022 at the Marriott Marquis in Times Square, as part of the annual meeting of the American Physical Society.

BAL gives a huge thank you to everyone who attended our Art of Science reading of “The Half Life of Marie Curie.” We had a fabulous turn-out from returning supporters and many new faces with a Standing Ovation!!

“It was a wonderful production.”

“We loved the Marie Curie Reading. The Acting was Terrific!”

“My friend and I  had a great time at the performance. Teri Black and Susan Richard were brilliant! I am looking forward to more performances from them” 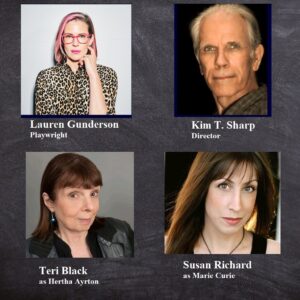 In 1911, Marie Curie won the Nobel Prize in Chemistry for her discovery of the elements radium and polonium. By 1912, she was the object of ruthless gossip over an alleged affair with the married Frenchman Paul Langevin, all but erasing her achievements from public memory. Weakened and demoralized by the press lambasting her as a “foreign” Jewish temptress and a home-wrecking traitor, Marie agrees to join her friend and colleague Hertha Ayrton, an electromechanical engineer and suffragette.THE HALF-LIFE OF MARIE CURIE revels in the power of female friendship as it explores the relationship between these two brilliant women, both of whom are mothers, widows, and fearless champions of scientific inquiry.