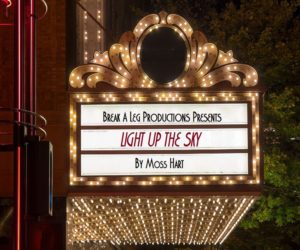 Light Up The Sky

About the Play: This comedy revolves around a group of New York theatre-folk who attend the opening of their new play in Boston. The lead actress, the backer, and several others, are in seventh heaven at the prospect of a tremendous success which they hope for in the work of a young unknown writer. Gathered in a hotel room, these people go through their paces with tremendous gusto and many exhibitions of temperament. The opening of the play, which is a very earnest and experimental work, is such as to lead the cast, director and backer to believe it a flop. Instantly they turn against themselves, the production, the author and savagely proceed in what looks like an attempt to destroy themselves and all their former hopes. An outstanding hit of the Broadway theater. A gorgeously amusing comedy about show folks.
About the Playwright:  Moss Hart was born on October 24, 1904, in New York City, in a working class/immigrant neighborhood on the Upper East Side, Moss Hart was introduced to the power of storytelling and theater at an early age by his grandfather, Barney, and his mother’s sister, Aunt Kate. Hart made it big on the stage by writing comedic plays. He co-wrote 1930’s Once in a Lifetime with George S. Kaufman, and the two went on to successfully work together on a number of projects, including 1934’s Merrily We Roll Along and 1936’s You Can’t Take It With You; the latter depicted a zany family culture clash and won the Pulitzer Prize. Hart also turned to screenwriting work, notably penning the Judy Garland classic A Star Is Born (1954).Moss Hart died of a heart attack on December 20, 1961, in Palm Springs, California. He had penned the popular 1959 memoir Act One, which was turned into a 1963 film starring George Hamilton.