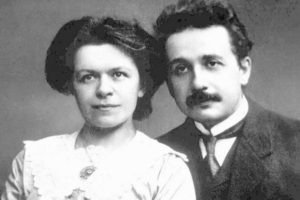 Celebrating the 100th anniversary of the confirmation of Einstein’s general relativity theory.

Synopsis:
In the late 1800s Mileva Marić, a young Serbian woman facing the exclusion of women from higher education in most of Europe, travels to Zurich, Switzerland where she meets another first-year physics student, Albert Einstein. Mileva and Albert soon fall in love and eventually marry, a romance and marriage spanning Albert’s ascent to the top of his profession by the eve of World War I. But fate is unkind to Mileva, challenging her love and career and bringing upon the lovers both triumph and tragedy. Based on actual events, letters and poems.

This play was developed in collaboration with Break A Leg Productions, and its artistic director, Teri Black.